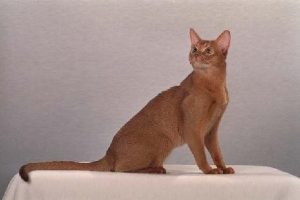 Cats exhibited at a show in England in the late 1800′s were reported to have been imported from Ethiopia (formerly Abyssinia).  Geneticists believe the breed actually originated in parts of Southeast Asia and were imported to England by Far East traders.  Breed was refined in England and imported to North America in early 1900′s.  Recognized by all breed associations for championship status.