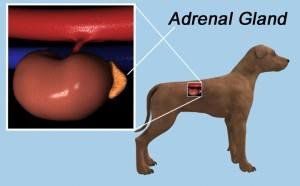 Addison’s Disease (hypoadrenocorticism) is a serious condition in which the adrenal glands do not produce enough cortisol and aldosterone. Diagnosis of Addison’s is often made during a life threatening crisis, as the symptoms of chronic Addison’s can be mild, vague, and varied. Cortisol and aldosterone are normal gluco- and mineralo- corticoid hormones in the body that regulate sodium and water retention, and fat metabolism during times of stress. An Addison’s animal may not be able to adapt to even minor stress, and during a crisis, electrolyte and water balance will fly out of control leading to heart arrhythmias, shock, and low blood sugar (glucose).

Symptoms of Addison’s begin as listlessness, vomiting, and diarrhea. It is typically a disease of young dogs around 4 to 6 years old but can be diagnosed in animals of any age. It is extremely rare in cats. Female dogs are over represented. Blood tests will usually reveal elevated kidney function tests because of chronic dehydration, and sodium will be low while potassium will be high, normal, or elevated. The ratio of sodium to potassium will generally be less than 27:1. The only definitive test for Addison’s is the ACTH stimulation cortisolassay. An injection of a calculated dose of ACTH is expected to generate a predictable amount of cortisol production by the adrenals. A very low cortisol after the injection is diagnostic for Addison’s Disease.

Treatment for an Addisonian crisis is rapid IV fluid and sodium replacement. If a low glucose is present, it will be corrected to prevent seizures and coma. Glucocorticoids like dexamethasone are given to prevent shock. Ongoing treatment for Addison’s involves supplementation of corticosteroids. The mineralocorticoids are replaced with the synthetic hormone fludrocortisone (Florinef) or DOCP (Percorten-V). Percorten is usually preferred despite expense because it is only given once a month, compared to Florinef which must be dosed twice daily. Response to Florinef usually declines over time, but supplementation with prednisone is not required because of Florinef’s dual activity. The use of Percorten-V requires additional dosing with prednisone. Electrolytes are monitored to measure the response to treatment with either drug.

Pseudo-Addison’s Disease is a syndrome caused by whipworm infection. It is poorly understood, but causes similar symptoms and electrolyte imbalances just as in Addison’s patients. ACTH tests will be normal however, and deworming is curative.