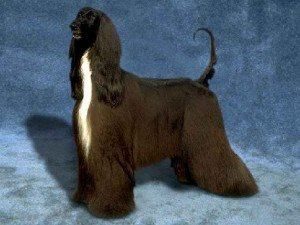 The Afghan originated in an area along the Afghan border with Iran known as Seistan.  Obviously from the same stock as the other Middle East Gazehounds, the Afghan changed to better do its job—coursing gazelle and leopard in the cold, mountainous terrain of Afghanistan.  Its primary difference from the other coursing dogs is its long coat, which was developed to insulate the dog from the cold and protect it from scrapes as it hunted on rocky slopes.  English soldiers returning home from the Afghan War brought these beautiful dogs home with them at the turn of the 20th century.  The first Afghans were registered in the American Kennel Club (AKC) stud book in 1927.