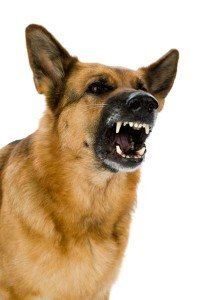 According to the Centers for Disease Control and Prevention, an estimated 800,000 people seek medical treatment for dog-bite wounds each year.  Half of them are children.  Since dogs are man’s best friend, this statistic begs the question, “What causes the dogs implicated in these attacks to become aggressive in the first place?  Is the aggressive tendency an avoidable trait that is bred into these individuals or is it conditioned behavior?  Are dogs a product of their environment or are some of them just born to bite?  Can we prevent canine aggression?  And, what can be done to rehabilitate an already aggressive dog?”

Dogs have been domesticated by man for thousands of years.  The canines we describe here are not feral dog descendants.  It is obvious that a wild canine such as a wolf, coyote, dingo, or a jackal would not make for a good house pet.  The domestic dog comes into the world seeking human companionship.  Still, they are animals and their ancient instincts are strong.  When we do not nurture the human-dog bond, they revert to those instincts that are not acceptable in our homes.  Thus, our dogs are products of the environment that we control.

That said there are characteristics of certain breeds of dogs (and the predominant lineage of a mixed breed) that lend themselves toward aggressive behavior when mishandled.  These traits are actually the inherent instincts of feral canines that we have bred into our dogs for particular purposes, such as herding livestock and hunting game.  Eye contact with prey is a favorable dominant quality of shepherd dogs and pointers.  However, eye contact from a small child may be interpreted as a challenge to an un-socialized dog and may provoke the dog to establish its dominance.  Therefore, certain qualities may cause a dog to be more prone to aggression than others.

The bottom line is that we can predict most aggression, and avoid it, if we are paying attention to the needs and unspoken language of our canine companions.  When choosing a dog for our family, we should select a breed with an energy level that is compatible with our own.  A working breed such as a border collie needs a lot of activity to avoid inappropriate behaviors caused by boredom.  Obedience training is mandatory for all dogs.  In fact, training helps the dog to be confident because boundaries and rules are established.  Insecurity and anxiety comes when the dog has no idea what we expect from it.  Everyone in the house must participate in training.  Being pack animals, dogs have a need to know where they fit in the hierarchy of the house.  A child should not be perceived as subordinate to the dog.  Furthermore, we must teach our children to respect the dog as well.  Even the most docile animal has a pain threshold.  On the other hand, if a child is especially apprehensive about a dog, it can trigger anxiety in the pet and lead to fear biting.  Small children should never be left alone with any dog.

Spaying and neutering not only prevents unwanted litters of puppies, it also reduces aggressive tendencies.  Hormones are powerful signals to become territorial, possessive, and dominant.  The dog should also be taught to allow treatment of sensitive areas before any illness occurs.  While a puppy, the feet should be handled, the coat brushed, and the ears cleaned.  This will desensitize the pet and gain its trust that it need not be defensive.  The puppy should always relinquish food.  Many bites occur when a dog is guarding food. This instinct keeps wild canines from starving when the pack competes for a meal.

At the first sign of any aggressive behavior, professional help should be sought.  Aggression is amplified over time.  Every time a situation occurs, it reinforces the inappropriate response.  A canine behaviorist can give an unbiased opinion to help an owner see what is going wrong.  Many problems stem from the fact that our human nature causes us to see the dog’s actions as human emotions.  We misinterpret signals that are uniquely canine.  Don’t be ashamed to ask for help.

Thousands of dogs are euthanized for aggression.  Yet more are allowed to become aggressive despite this tragedy.  Public education is key to preventing the unnecessary destruction of man’s best friends.