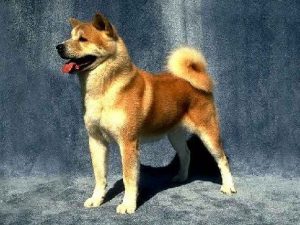 Named for a town on the northern Japanese island of Honshu, the Akita was a sporting dog of the noble houses.  Each Shogun kept a kennel of the big dogs to hunt deer, bear and boar.  It was forbidden to speak to the dogs or about them except in a special language called dog words.  Good examples of the Akita were jealously guarded and it was not until after World War II that any appreciable number left their homeland.  They were accepted for registration in the American Kennel Club (AKC) in 1973.