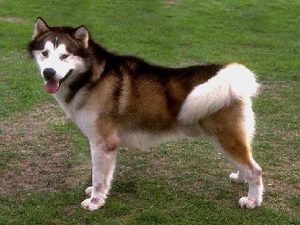 This is the sled dog of stamina and strength rather than speed.  It gets its name from the Malamute tribe, an Inuit people of northwestern Alaska.  These nomadic Eskimos used the dogs to haul their possessions between camps.  The breed type was stabilized in the 1920′s and accepted for showing in the American Kennel Club (AKC) in 1935.  After that, it gained immense recognition because of its use as a war dog.