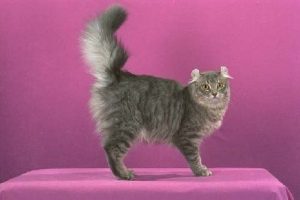 Occurred as a spontaneous mutation in Southern California in 1981 when an adopted stray named Shulamith gave birth to a litter of kittens in which two of the four had ears that curled away from their faces.  Selective breeding and showing began in 1983 with allowable outcrosses only allowed to non-pedigreed cats.  Accepted for registration in the Cat Fanciers’ Association (CFA) in 1986 and accepted for championship status by CFA in 1993.