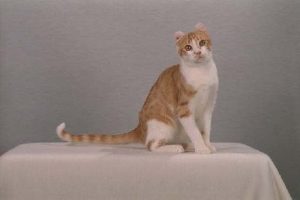 Occurred as a spontaneous mutation in Southern California in 1981 when an adopted stray cat named Shulamith gave birth to a litter of kittens in which two of the four had ears that curled away from their faces.  Shulamith produced the first shorthaired kittens in her third litter, and at that time they were considered undesirable.  As requests for shorthaired kittens became numerous, a breeding program to develop a shorthaired version of the breed was developed.  Accepted for registration in the Cat Fanciers’ Association (CFA) in 1986 and accepted for championship status by CFA in 1993.