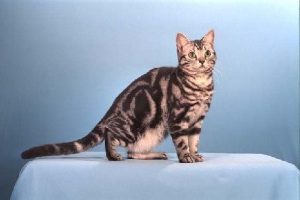 Descendants of the Colonial farm cat who were prized for their ability to control rodent populations.  Selective breeding began in the early 1900′s when foreign breeds threatened to alter their natural barn cat beauty, hardiness, and mild temperament.  Known as the Domestic Shorthair until 1966, when the name was changed to American Shorthair.  Accepted for championship status in all breed organizations since the 1960′s.