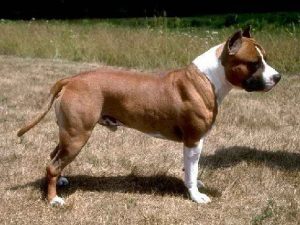 Originated in 19th century England by crossing Bulldogs and various terriers, the Am Staff was refined to its present looks in the United States.  Impossible to divorce the breed from its pit-fighting past.  Registered by the American Kennel Club (AKC) in 1935 under the name Staffordshire Terrier.  In 1972 the AKC name was changed to American Staffordshire Terrier to differentiate it from the smaller Staffordshire Bull Terrier from England, which was not recognized until 1975.