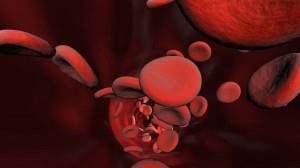 Anemia is defined as a decrease in the number of red blood cells (erythrocytes) in circulation in the blood stream. Red blood cells are comprised of hemoglobin, an iron-rich protein that delivers oxygen to tissues and organs. Symptoms of anemia may be mild to life threatening depending on the degree of red blood cell depletion. Acute blood loss from trauma, immune-mediated destruction of cells, kidney failure, blood parasites, and bone marrow disease are a few of the numerous causes. Treatment options depend entirely upon the severity and the mechanism responsible for the anemia.

Red blood cells make up the majority of the cells found in circulation. Red cell measurement is performed in several ways. First, the packed-cell volume (PCV) is the percentage of whole blood that is made up of cells, with a normal value of around 35 – 55%, depending on the species and breed. Below this range is considered anemia, and less than 12% is considered life threatening. Absolute red cell count is an estimated number of cells per volume of whole blood. Normal canine and feline blood contains more than five million cells in every microliter (1/1,000,000th of 1 liter). Other tests that determine red blood cell health, but not quantity, include MCV – mean corpuscular volume (size of the cell) and MCHC – mean corpuscular hemoglobin concentration (amount of hemoglobin bound to the cell).

Treatment for acute blood loss may include a blood transfusion. Whole blood or packed red cells are given intravenously to correct the anemia, giving the body time to regenerate its own cells.

A synthetic hormone called Epogen (erythropoietin) can be used to stimulate the bone marrow to produce red blood cells. Erythropoietin is produced by the kidneys; therefore in chronic renal failure, Epogen may be supplemented to correct anemia. Antibodies form in response to the Epogen injections however, making repeated injections less and less effective as the renal failure progresses.

In IMHA (immune-mediated hemolytic anemia), the body destroys its own red blood cells for some reason. The treatment for IMHA includes immunosuppressive drugs like prednisone and azathioprine (Imuran). These medications stop the immune system from attacking the red blood cells. Maintenance dosing of steroid is almost always necessary to prevent recurrence of the anemia.

The prognosis for a pet diagnosed as anemic depends on the degree of anemia, whether or not the bone marrow is capable and actively producing new cells, and the underlying disease process that caused the initial blood loss. In general, regenerative anemias are more easily treated than non-regenerative forms. The prognosis of the causative disease process will directly determine the outcome.