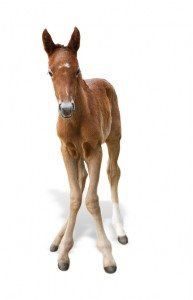 Angular limb deformities are either congenital (present at birth) or acquired (caused by disease that affects bone growth). The condition describes a deviation in the shape of the limb bones from what is considered normal. When present, the bones bow toward or away from the center of the foal’s midline as observed from the front of the animal. It is most common that this deformation occurs at the knees. “Bow-legged-ness” is called carpus varus, whereas “knock-kneed-ness” is called carpus valgus. The most common angular limb deformity seen in foals is carpus valgus.

Bones of the limbs are capped with a growth plate that accommodates the bones’ lengthening while the foal matures. Excessive intake of energy-dense feed during rapid growth phases in addition to imbalance of mineral intake are thought to cause the growth plates to develop more prominently on one side of the joint than the other. This problem affects the left and right limbs symmetrically. Crib feeding may cause competition between foals which often ends in one foal hoarding more grain. This “gluttony” leads to nutritional overloads in the dominant foal which may result in acquired angular limb deformity.

Congenital defects may cause the cuboidal bones in the knees to remain soft and susceptible to deformation during exercise after the foal is born. Once the bones finally do harden by a process called ossification, the limbs will permanently deviate from a normal angle unless corrected.

Thoroughbreds may be slightly more at risk for developing angular limb deformities, but any breed or sex horse may be affected. Visual inspection usually leads to a presumptive diagnosis. The foal is observed from the front and the rear and while walking on level ground to confirm lateral deviation in the limb at the carpus (knee), fetlock (ankle) and/or tarsus (hock). Many times the affected joints will be swollen by synovial effusion (inflammatory joint fluid). Lameness is likely in the cases of cuboidal bone damage, but is not necessarily present in acquired limb deformity caused by diet until later in life. Abnormal hoof wear will be present in either case and is proportional to the degree of limb angle deviation.

If limb deformities are seen at birth or shortly after birth, the foal should be treated by a veterinarian as soon as possible before complete bone ossification. Splinting or casting the limbs for several weeks after birth may help “set” the bones at a more normal angle. Sometimes x-rays are taken in older foals to help confirm the condition and calculate the limb angle. Corrective farriery is usually very helpful in treating these horses. Surgery will be indicated when the angle of deviation is greater than 10 to 12 percent from normal (>12° anglation).

There are numerous techniques employed in the surgical correction of angular limb deformities. The orthopedic surgeon will determine the best option depending on the particular case. It is very important that the foal is examined early if surgery is to be considered. The success rate is inversely proportional to age of the animal.

In order according to the severity of the condition, treatment starts with a conservative approach. This may include stall rest for up to 8 weeks, repeated x-rays to assess bone ossification progress, splinting or casting, corrective hoof trimming and shoeing, periosteal stripping (minor surgery), and orthopedic surgery.

The prognosis for angular limb deformities depends upon severity of the condition, how early recognition and intervention occurs, and the expected use of the horse. About 2/3 of horses diagnosed with incomplete cubodial bones ossification of the tarsus (hock) will not be able to be used productively.