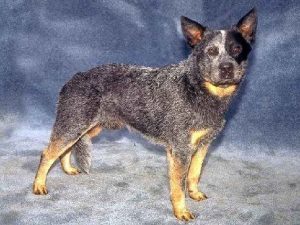 The first records of the Australian Cattle Dog date back to about mid-19th century Australia.  In the tropical north, a robust, short-coated dog was needed to herd large, half-wild cattle in the outback.  Beginning with British foundation stock, primarily the Smithfield Heeler, the Aussie stock-men added Dingo blood and a dash of Kelpie for tractability and intelligence.  The result is a no frills, working dog.  Not the most handsome canine, the Aussie Cattle Dog survives for one reason—it is good at its job.  No other breed could drive such rambunctious cattle such long distances in such heat.  The Australian Cattle Dog is as tough as the land that formed it.  Quick to be recognized in its homeland, the breed was entered in the stud book in 1903.  It was not until 1979 that it was given status with the American Kennel Club (AKC).