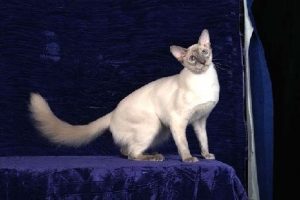 Originated as a spontaneous genetic mutation in litters of Siamese cats that resulted in some kittens being born with long hair.  Although longhaired Siamese have always appeared in Siamese litters, it wasn’t until the 1940′s that a serious effort to promote the longhaired version as a separate breed was initiated.  Accepted for championship in the Cat Fanciers’ Association (CFA) in 1970.  In CFA, any colors other than seal point, blue point, chocolate point and lilac point are considered to be a separate breed known as Javanese.  There is no such color distinction in The International Cat Assocation (TICA).