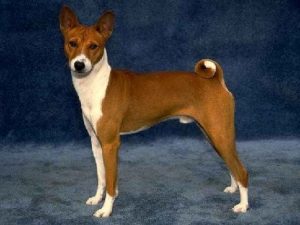 Thought to have originated in the rain forest of Central Africa in what is now Zaire and the Sudan, but the Basenji was first depicted on the tombs of ancient Egypt.  The dogs were most likely tribute offerings to the Pharaohs.  The first pair brought to England in 1895 caused a sensation.  Early attempts to breed Basenjis in Europe and the United States were thwarted by distemper outbreaks.  In 1943 the barkless dogs were registered by the American Kennel Club (AKC).