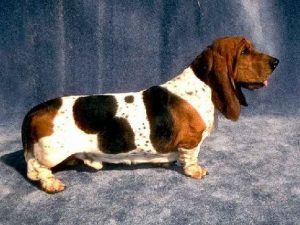 Although the Basset family of dogs originated in France, the one Americans know as the Basset was refined in England in the last part of the 19th century.  The scent trailing breed was developed by French nobility to hunt rabbit, hare, deer, and other game that could be taken on foot.  The shortness of leg and bulky body make the Basset especially useful in dense cover.  The amusingly shaped body is really quite efficient at punching into thickets.  Recognized by the American Kennel Club (AKC) in 1885, the breed had an amazing spurt of popularity in the 1950′s when it was the darling of the advertising world.