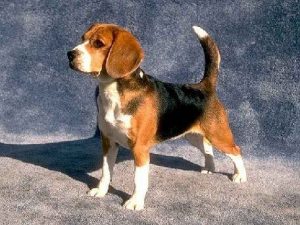 Beagles have been the rabbit hunter’s breed of choice since the days of Henry VIII and Queen Elizabeth I of England.  Bred for sportsmen to follow on foot, the versatile Beagle can be used singly, as a couple (two dogs), or in a pack.  Packs of the merry little hound have been in the United States since the Revolutionary War.  They were one of the foundation breeds of the American Kennel Club (AKC).  The most popular of the hound breeds in the United States, the Beagle is actively hunted and there are more competitive field events for Beagles than any other hunting dogs.  The Beagles are separated into two varieties by height and shown separately.  Beagles up to 13 inches at the shoulder are called 13-inch Beagles.  Those from 13 to 15 inches at the shoulder are called 15-inch Beagles.  Other than size, the two varieties are identical.