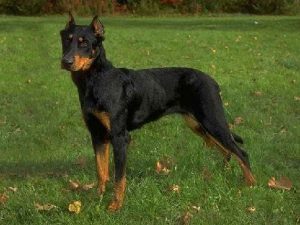 The Beauceron is one of the best-known sheepdogs in France.  Like some of its compatriot breeds, the Beauceron has double dewclaws that enable it to get a good grip in the sheep’s wool when it climbs across their backs to get across a flock.  Although it has been used as a herding dog for centuries, it is thought the original use was as a hunting dog.  The Beauceron is also used successfully as a police dog.