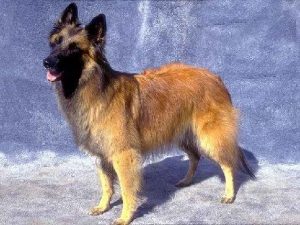 There are three herding dogs known collectively as the Belgian Shepherds.  They share the same standard and are identical except for coat and color.  The most popular is the long-haired Tervuren, which is a rich mahogany overlaid with sooty black.  There is another equally popular long-haired variety called the Gronendael, which is solid black.  The short-haired variety is the Malinois, which is a brown or tan color with black mask and ears.  They are shown as varieties of a single breed in some countries and as three separate breeds in others, including their Belgian homeland.  The American Kennel Club (AKC) has considered them as three separate breeds since 1959.