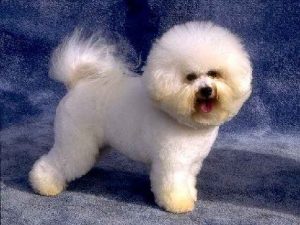 The history of the Bichon Frise is like that of a mysterious and exotic stranger.  Some claim a Maltese as the foundation stock, others see a dash of Poodle or Barbet.  The truth is the breed is probably a mixture of the best qualities of a lot of little lap dogs.  It is an ancient breed at any rate.  Bichons have been the favored playthings of aristocratic ladies since the Middle Ages.  They spread around the Mediterranean region because sea captains knew well the favors they could buy with one of the little canine charmers.  But as royalty’s fortunes declined, so did that of the Bichon Frise.  However, for a dog that was bred to please, it had other ways to make a living.  It literally joined the circus.  For almost a century the little powder puffs have amused audiences as clown dogs or dancing companions of organ grinders.  They remained popular in France but it wasn’t until the 1950′s that they began to attract an international following again.  The American Kennel Club (AKC) gave them full recognition as a member of the Non-sporting Group in 1973.