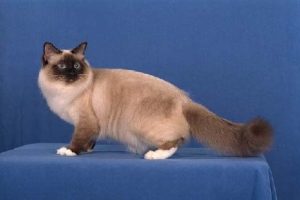 Believed to have originated in Burma, where the Birman was considered the sacred cat of the Kittah priests.  A legend states that the Birman’s blue eyes come from a temple goddess and that its white feet (referred to as “gloves”) come from the head priest.  In 1919, a pair of Birmans were shipped from Burma to France.  The male did not survive.  The kittens of the pregnant female became the foundation stock of the Birman breed in France.  At the end of World War II only two Birmans were left alive in Europe, requiring an outcrossing program to re-establish the breed.  Birmans were exported to the United States from France in 1959 and were accepted for championship in the Cat Fanciers’ Association (CFA) in 1967.