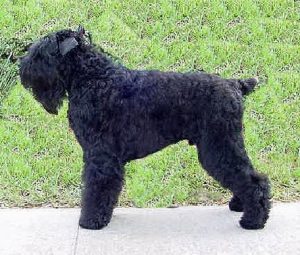 Developed in Russia just after World War II, the Black Russian Terrier was created to fill a need for a large, fearless, utility dog for military and police work.  Base stock was the Giant Schnauzer, Airedale Terrier, Rottweiler, and the Russian Newfoundland or Russian Diver (a cross of Newfoundland with different breeds).  The result was a hardy dog that looks like a stocky version of the Giant Schnauzer but with a more actively protective personality.  The breed originated in the military kennel, Red Star, near Moscow.  For a long time now, St. Petersburg has been the source for quality Blackies.  With the collapse of the Soviet Union, export restrictions relaxed and the Black Russian Terrier, commonly known as the BRT, is finding new friends around the world.