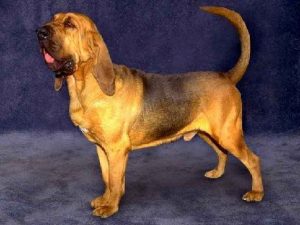 An ancient breed whose exact origins are lost in antiquity.  It is known that the Bloodhound was used by hunters in ancient Greece and Rome.  However, it was in Belgium that it was refined to become the ultimate tracking dog.  The name Bloodhound has nothing to do with following a trail of blood, although they can do that.  It referred to the pure blood of the dog, as in blue blood.  Bloodhounds have been exhibited in the United States almost from the beginning of organized dog shows.