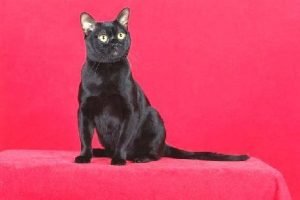 Created by a breeder in Kentucky who crossed a copper-eyed, black American Shorthair with a sable Burmese in an attempt to create a mini-panther.  Named after the black leopard of India and the city of Bombay.  Breeders are still allowed to outcross to Burmese for type and to black American Shorthairs for color.  Accepted for championship status by the Cat Fanciers’ Association (CFA) in 1976, 18 years after the breeding program began.