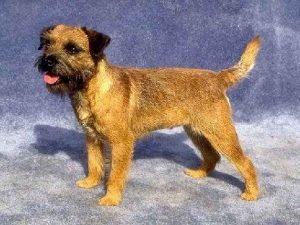 The Border Terrier, which had no particular name until the 1860′s, was bred by farmers in the hill country that makes up the border between Scotland and England.  Strangely enough, the terrier did not get its name from the border country but from a pack of foxhounds called the Border Hunt.  The little go-to-ground terriers, which followed the hunters, were used to roust the fox from its lair.  Working ability was favored above all, and to this day the rough-and-ready Borders retain the pluck and spirit necessary to go after a fox, badger or otter.  Fearful that acceptance into the show world would diminish the supremely important working abilities, Border breeders did not join the English Kennel Club until 1920.  Membership into the American Kennel Club (AKC) came even later, with the first dog registered in the 1927 Stud Book.