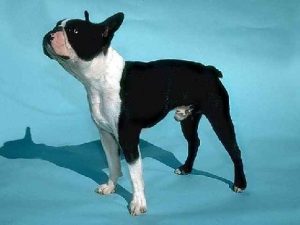 A breed made in the United States, the Boston Terrier is the result of a cross between an English Bulldog and a white English Terrier (a breed now extinct). The original Boston Terriers, which weighed 35 pounds, were considerably larger than the typical twenty-pound dog today.  Dog fanciers around Boston called the dog they developed the Round Head, Yankee Terrier, American Bull Terrier, and several other names.  When the breed was admitted to the American Kennel Club (AKC) in 1893, it was decided that Boston Terrier would be used.