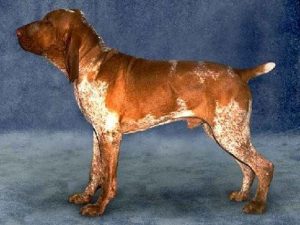 The Bracco Italiano is thought to originate from crosses made to the sighthounds brought to Italy by the Phoenician traders from Egypt.  It is the ancestor of all European pointers.  Referred to by its admirers as noble, this was a popular hunting dog during the Renaissance and was often given as a gift from Italian government officials to VIP’s in other countries such as France and Spain.  It accompanied net hunters of the Middle Ages, and later it was teamed up with falconers who used it to flush the falcon’s quarry.  Its popularity declined during the 1800′s and it is now undergoing a revival in popularity in its homeland.  It remains almost unknown in the United States.