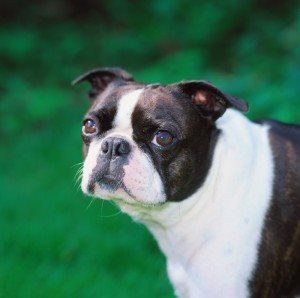 The term brachycephalic literally means short-headed.  In dogs, brachycephalic breeds are easily identified with their pushed in noses and bulging eyes.  Pugs, Bulldogs, Boston Terriers, and Shih Tzus are included in this group.  As cute as they are, their unique anatomy makes them susceptible to certain serious problems of which their owners need to be aware.

Brachycephalism causes a dog to have a normally sized lower jaw with a compressed upper jaw and sinus.  The nostrils are constricted, and the length of the nose is shortened overall.  The tongue and soft palate are not reduced in size however, and this effect reduces the capacity of the upper airway.  Most brachycephalic dogs snort and snore.  A collar can further restrict the airway especially when pulling on a leash; therefore, these dogs should be fitted for a harness instead.

Respiratory problems are very common with these breeds, and they are much more susceptible to heat exhaustion and stroke than non-brachycephalic dogs.  A combination of stenotic nares and tracheas (constricted nostrils and windpipes) and soft palate enlongation (too much soft tissue in the back of the throat) significantly impairs the animal’s ability to move air in and out of the lungs.  The condition is referred to as Brachycephalic Airway Obstructive Syndrome.  Dogs do not sweat.  Instead, they cool themselves by increasing their respirations.  Brachycephalics have a difficult time cooling off in heat and humidity, and extra precaution should be taken when these dogs are outdoors during warmer months.

Surgical techniques to improve respiratory function in severely affected dogs may be necessary.  Opening of the nostrils is called a nares resection.  Surgery on the palate is called a soft palate resection.  These are indicated when breathing is especially compromised and quality of life is reduced.  The improvement after surgery depends on the degree of airway obstruction and the amount of tissue that can successfully be removed.

Obesity is a complicating factor in Brachycephalic Syndrome.  Just as excess weight burdens the airway in all breeds, the problem is worse in pug-nosed dogs.  A weight loss program should be started to improve respiratory function.

Chronic airway obstruction can lead to heart disease.  Heart muscle enlargement is common at an earlier age in brachycephalic breeds because of their respiratory problems.  Steps to correct airway obstruction including surgery and weight loss can significantly delay the progression of heart failure.

Other problems associated with brachycephalism involve the eyes and teeth.  The bulging eyes are more susceptible to injury, and most of these dogs have reduced tear production or an inability to keep the lubricating tears in the eye.  Persistent wetness of the fur around the eyes means that the tears are flowing off of the globe of the eye at an accelerated rate.  Keratoconjunctivitis (KCS, or dry eye) is very common in brachycephalic breeds.  The eye socket itself is very shallow in these dogs, and it is possible that the entire globe can pop out of the socket  with even minor injury to the face and head.  This will require emergency surgery to preserve the eye and restore vision.

Even with their smaller mouths, brachycephalic dogs still have 42 teeth.  Overcrowding in the mouth makes them more prone to periodontal disease (of the teeth and gums).  Food debris is trapped more easily which becomes food for infection.  Routine brushing, dental examinations, and prophylactic cleanings are especially important for these dogs.

It is important to be aware of the unique problems that brachycephalic dogs can have.  Discuss these concerns with your veterinarian to minimize the likelihood that your dog will succumb to these serious risks.