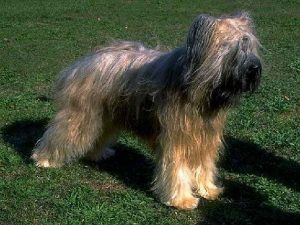 The history of the Briard can be traced back to the time of Emperor Charlemagne.  This very old French-shepherd dog can be seen in eighth-century tapestries.  Its great courage and loyalty are mentioned in records from the 12th century on.  The French-shepherd dog, with the springy gait, is both a herder and a flock guardian.  A club of fanciers was formed in France in 1897 and the breed’s fortunes followed the tides of war in the early 20th century.  The introduction of the Briard to the United States is not well documented.  It is thought that the Marquis de Lafayette may have brought some to his friend George Washington.  It is known that it took until 1922 for a United States born litter of Briard puppies to be recorded.