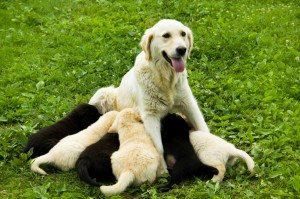 Brucellosis is a contagious bacterial infection that causes late-term fetal abortion in female dogs and infertility in males. It is also of particular importance because of its zoonotic potential; it may be possible, albeit rare, for humans to become infected through direct contact or inhalation of bodily fluids from carrier animals. Several species of the bacterial genus Brucella cause disease in livestock animals. Brucella canis is the most common species found in dogs.

B. canis is most often transmitted from one dog to another during breeding; but the organism may be present in all bodily fluids, so any contact between dogs may spread the bacteria. Some dogs can become chronic carriers capable of spreading the organism for years. Puppies can become infected in the womb and during nursing, although most will not be born live. The bacteria do not survive well in the environment outside of the host however, and are susceptible to common disinfectants.

Female dogs with Brucellosis may exhibit few other symptoms of disease except an inability to conceive or spontaneous fetal abortion. Males may become infertile and have testicular swelling followed by atrophy. In advanced cases, both sexes may experience lethargy, back pain, paralysis of the rear limbs, eye inflammation, and enlargement of the spleen and lymph nodes.

It is easy to screen for Brucellosis with an in-clinic rapid slide agglutination test (RSAT). On the other hand, B. Canis may be difficult and expensive to treat once a dog becomes infected. If a positive RSAT result is discovered, a diagnosis is usually confirmed with a Brucellaantibody titer or antigen test run in a reference laboratory. This is due to the high sensitivity, yet low specificity (occasional incidence of false positives) of the in-clinic test kit; false negative tests are very rare. All dogs should be screened for B. canis prior to intentional breeding to prevent the spread of this disease.

Brucellosis is very difficult to treat and completely eliminate from infected animals due to the bacteria’s wide-spread tissue distribution. Combinations of broad-spectrum antibiotics may be prescribed and neutering / spaying may help to prevent transmission, but chronic cases can continue to spread the bacteria despite treatment. Relapse / recurrences are very common, and diagnosed animals should not be used for breeding even after treatment regardless of subsequent test status.

Breeding and boarding kennels are excellent reservoirs for Brucellosis. All new dogs entering a breeding facility should be screened before exposing other animals. Quarantine and retesting in one month is recommended. Boarding kennels should not allow direct contact between dogs unless they are tested, and the kennel should be adequately ventilated to prevent airborne exposure. Dogs kept near livestock should be considered at an increased risk for Brucellosis as well.

Brucella species have been shown to infect humans on rare occasions. People with compromised immune systems and pregnant women are especially susceptible.

There is currently no vaccine available to protect dogs (or humans) from becoming infected by B. canis. Diligent screening and isolation of positive animals is the only method to eradicate this disease from dog populations. Proper disinfection of exposed kennels, equipment, and bedding should be instituted after a positive dog is discovered.