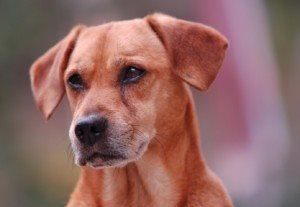 Cognitive function deteriorates as the brain ages, and dogs are not immune to this problem.  While mild behavioral changes are easily overlooked as “normal” old dog issues, advanced senility can be very stressful for the pet and the pet owner.  Canine Cognitive Dysfunction can be manifested as inappropriate elimination in the house, disorientation, changes in sleep patterns, loss of interest in food and play, vocalizing, and even failure to recognize family members.  It is important to recognize these changes as symptoms of disease instead of misbehaviors.  Discipline is unwarranted and will only serve to further confuse and frustrate the dog.

One cause of canine cognitive dysfunction is thought to be a depletion of dopamine, a chemical neurotransmitter vital to normal brain function.  While the reasons that dopamine levels diminish with age are not completely understood, medications that increase dopamine or extend its activity are known to decrease the symptoms of senility in both animals and people.

One drug that has shown some promise in dogs is called Selegiline or L-Deprenyl (Anipryl).  This medication prolongs the activity of dopamine in the brain by inhibiting the enzymatic function of monoamine oxidase (MAO).  MAO is responsible for metabolizing dopamine.  In addition, Selegiline has shown to be neuro-protective by reducing the damage to cellular DNA caused by free radicals, or oxidizers.  About 75% of dogs will show some improvement in cognitive ability after one month of Selegiline, although significant improvement in one specific symptom may not be adequate to justify its continued use.  All MAO Inhibitors have significant and potentially dangerous drug interactions; therefore some geriatric dogs already on (or needing to be prescribed) other medications for concurrent health problems may not be able to take Selegiline.

Diet may be another place to look for help with canine cognitive dysfunction.  Diets formulated for improved brain function contain increased levels of antioxidants and Omega-3 fatty acids.  In feeding studies, dogs fed these formulas performed better at cognitive assessment tests than dogs fed a placebo diet.  The results will be very gradual over several weeks.

It is shown in people, and may translate to dogs, that if you don’t use it – you lose it.  Mental exercises may help to delay the progression of senility.  Dogs are never too old to learn new tricks.  Adding hand signals to commands may help a dog with hearing loss to understand, and the mental activity can improve overall cognitive abilities.  A stimulating environment is essential to keeping the mind sharp.

The symptoms of senility are easy confused with the symptoms of serious metabolic disease common in older dogs.  For example, inappropriate urination may have multiple causes.  A thorough health exam, blood chemistry profile, and urinalysis can quickly rule out a kidney problem or bladder infection.  These tests will be needed before starting any new medication specifically for cognitive dysfunction.  Our tendency is to associate a dog’s behavior with human behavior.  Jumping to this conclusion may overlook the likelihood that there is a physiological change occurring in our older pet.