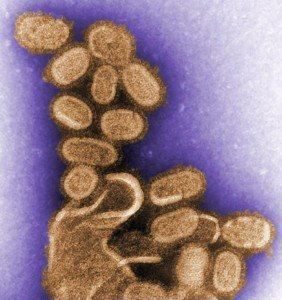 According to the Centers for Disease Control and Prevention (CDC) website, ““Dog flu is a contagious respiratory disease in dogs caused by a specific Type A influenza virus referred to as a “canine influenza virus.” This is a disease of dogs, not of humans.”” It originated in horses before mutating into a form that infects and spreads between dogs.  Dog flu is not related to either the swine or avian flu that has had so much media attention lately.

First discovered as a cause of severe respiratory illness in a group of racing greyhounds in 2004, dog flu continues to be a threat to primarily groups of dogs held in close quarters, such as in breeding facilities, shelters, pet stores, et cetera.  Symptoms are similar to, but sometimes more severe than “kennel cough” caused by the Bordetella organism.  They include fever, an unproductive dry cough, loss of appetite, and exercise intolerance or lethargy.  For dogs with pre-existing heart and lung disease, dog flu can be devastating. Developing secondary bacterial pneumonia is the most serious consequence of this illness; in which case, canine influenza can be fatal.

Overall, the mortality rate of dog flu is very low (less than 1%).  Although the disease is extremely contagious, around half of all dogs may test positive for antibodies to the virus without ever exhibiting any clinical symptoms.  Despite these good odds, it is recommended that any symptomatic dog be given veterinary attention and supportive treatment.  Secondary bacterial infection can quickly overwhelm the dog, causing extremely high fever, shock, and disseminated intravascular coagulopathy (a bleeding disorder whereby the blood’s clotting ability is interrupted, and the pet may bleed to death internally).  It is easy to head off these serious problems when simple supportive therapies are instituted early in the progression of the illness.  Specific treatments for complicated flu cases include intravenous fluid and electrolyte replacement, diuretic drugs that remove fluid from the lungs, and broad spectrum antibiotics.  Uncomplicated cases may require only a cough suppressant to reduce tracheal inflammation that may lead to bacterial infection, or they may resolve on their own without additional treatment.  Your veterinarian will institute treatment as indicated by the dog’s condition.

Antibody tests are available to confirm canine influenza by taking comparative blood levels during the active stage of the disease and 2 to 3 weeks afterward.  Also, DNA testing called a Polymerase Chain Reaction (PCR) test can be performed on a sample of respiratory secretions during the illness phase.  This is the most sensitive and accurate test, but may be relatively expensive and not widely available.

Fortunately, there is a canine influenza vaccine available.  It would not be included in most dogs’ annual core vaccine regimen; but, for high-risk animals it may be warranted.  Dogs should receive one vaccine, followed by a second dose 2 to 4 weeks later.  Ideally, they should receive the vaccine series at least one week before entering a high-risk environment, such as the shelter or boarding facility.  Your veterinarian can help determine whether the canine influenza vaccine is appropriate for your pet.

The vaccine does not prevent the dog from getting dog flu, but it will significantly shorten the duration of symptoms if the virus is contracted.  It will reduce the symptoms and may help prevent the disease from spreading by reducing the amount of viral shedding.