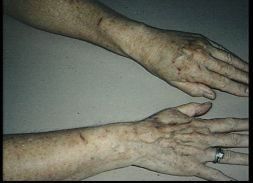 Cat Scratch Fever is not just a rock song from the 70s; it is a real disease. More properly called Cat Scratch Disease, it is the name of a condition in humans caused by the bacterium, Bartonella henselae. This microscopic organism lives in the tissues surrounding the claws of many normal, healthy cats. Although it is usually harmless to cats, Bartonella can cause illness in humans.

How People Get It
Most of the time, people get Cat Scratch Disease from a bite or a scratch from a cat that carries the bacteria. It can also be transmitted by fleas. In scientific studies, close to half of normal cats were shown to be carriers. The studies also showed that kittens are more likely to be infected than are adult cats. Children and teens seem to be more susceptible and more cases occur in the winter, when free-roaming cats spend more time in the house.

Symptoms in People
Cat Scratch Disease is typically a mild illness from which people recover without medical attention. The primary symptoms in people are a raised bump at the site where the bacteria has entered the skin and one or more swollen, tender lymph nodes. In less than 25% of cases, people experience a low-grade fever and malaise. The symptoms usually resolve in a few months without treatment.

More serious symptoms that occur rarely include infection of the eyes, brain, heart, lungs, skin or liver. These symptoms are more likely in immunosuppressed individuals, especially those with active cases of acquired immunodefiency syndrome.

Symptoms in Cats
Symptoms in cats are thought to be rare, but research is ongoing. Bartonella infection has been suggested as a cause of some cases of mild fever, loss of balance, and eye infections in cats.

Highly effective flea control products are available from your veterinarian. Keeping your cats claws trimmed or capped with disposable plastic covers are good ways to reduce the likelihood of a scratch. Your veterinarian can teach you how to trim your cats claws or can do it for you. They can also provide information and assistance with convenient nail caps to provide additional protection.

Immuno-compromised people should be sure to inform their doctors that they have cats and should notify their doctors if they do get bitten or scratched. Early treatment with antibiotics can help reduce the severity of serious infections.