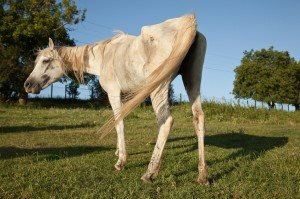 In horses, “Choke” describes the affected animal’s visible symptoms and the possible outcome of an episode, but it is only secondarily a disease of the airway and respiratory system, even if this is the more serious manifestation of the underlying problem.  It is first caused by an obstruction of the esophagus, or the passage between the mouth and the stomach.  Choke occurs when food becomes lodged in the esophagus, often the result of having not being chewed properly.  In most cases the horse can still breathe, but in an effort to dislodge the obstruction, it may cough, gag, expel food and mucous from the nares, and potentially aspirate the material into the trachea and lungs.  If the obstruction is not cleared, the horse will be unable to eat and drink, and it may eventually dehydrate.  If the horse aspirates, it can develop pneumonia or die from asphyxiation.  It wouldn’t seem that horses would often choke on their food; but, this is a very common emergency seen by veterinarians, and its underlying etiology (reason for occurring) must be corrected to prevent its likelihood and recurrence.

Accidentally choking on food and foreign bodies can happen to any animal, but there are certain pathological processes and husbandry / behavioral issues that might leave a horse predisposed to this disorder.

Choke is most often a consequence of improper mastication (the first stage in the digestion process).  The food a horse consumes must first be broken down physically by chewing.  This not only reduces the size of the food particles, it is vital for digestion by increasing the surface area of the nutrients that will be chemically reduced by enzymes in the rest of the digestive tract.  If for any reason, the animal cannot – or opts not – to properly chew its food, it will be at an increased risk to develop esophageal obstructions, a.k.a. Choke.

Horses’ teeth are worn down and replenished by new growth continually over a lifetime of chewing on rough sources of nutrition like grasses and grains.  If wear does not occur evenly, the horse will develop a malocclusion; the teeth will not meet properly and effective grinding / crushing of the food will be reduced.  Severe malocclusion can cause sharp edges to form on the teeth which may irritate or injure the soft tissues of the mouth.  The animal may begin to avoid chewing in painful areas of the mouth, which further exacerbates the problem.

Malocclusion, and dental problems in general, are very common in domestic horses, because the modern sources of fodder provided to them are less likely to result in a sufficient rate of wear to keep up with normal tooth eruption.  In older horses, missing teeth may be a reason for improper mastication.  Congenital malocclusion (over bite / under bite) may also predispose a horse to problems with chewing.  Any of these problems that interrupt the process of chewing may lead to swallowing an abnormally large bolus of unprocessed food that is likely to become trapped on its way down the esophagus.

Diseases of the esophagus itself can also lead to Choke.  Tumors and scarring from previous obstructive episodes can reduce the diameter, elasticity, and muscle tone of the esophagus.

Despite good dental health and normal esophageal function, a horse that “bolts” its food may still be susceptible to Choke.  This behavior is most often associated with malnutrition or inappropriate offerings (treats, table scraps).  Also, if water is not accessible, dried feeds may be more likely to become obstructions.

Horses with esophageal obstructions will swallow compulsively and repeatedly.  They may drool and expel food particles from the mouth and nose.  Often, the horse will extend its neck and cough.  Excessive coughing may lead to respiratory distress, in which case the horse may aspirate saliva, water, or food into the trachea during a fit.  Any horse suspected of choke should be immediately denied access to food and water, calmed as much as possible, and be examined / treated by the veterinarian as soon as possible.

The veterinarian will pass a nasogastric tube (nose to stomach) in order to clear the obstructed bolus of food and assess any degree of physiological restriction in the esophagus.  Also, sedatives and spasmolytic drugs may be administered to relax the muscles of the esophagus and calm the distressed animal.  Failure to reach the stomach will indicate a complete blockage, in which case general anesthesia may be required to further evaluate and treat the horse.  An endotracheal tube will be placed which ensures an open airway and avoids aspiration while clearing the obstruction in the esophagus.  Severely distressed horses may be immediately anesthetized at the discretion of the veterinarian.  Extreme care to avoid aspiration and suffocation is the goal in treatment.

Once a horse has experienced an episode of Choke, it should be evaluated and treated for an underlying cause.  The owner should take certain measures to help reduce the chance of recurrences.  These same measures may help prevent Choke in the first place.

Also, allow as much natural grazing time as possible.  This will help prevent rapid feeding on processed feeds and aid in more normal tooth wear.

Provide plenty of water at all times.  Dampen dry and pelleted food before feeding.

Slow horses from bolting their food by placing large rock(s), too large to consume of course, in the middle of the feeder.

Consult a veterinarian on feeding recommendations for senior horses, those with dental problems, and horses with a prior history of Choke.