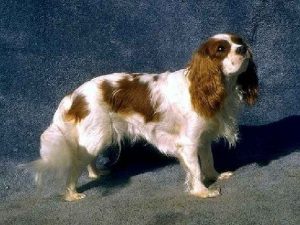 The history of this breed and the English Toy Spaniel are inexorably intertwined.  It is thought that the original Toy Spaniel, so favored by the English kings and queens, was a long muzzled variety similar to the Cavalier King Charles Spaniel.  However, in the 19th century breeders began to fancy a more pushed-in muzzle and domed head, and the old type disappeared.  In 1926, an American fancier, Roswell Eldridge, offered cash prizes for any Toy Spaniel breeders who could produce the old nosey-type dog again.  Through selective breeding, using only Toy Spaniel stock, the original dog was recreated.  It was carefully guarded and stabilized by the Cavalier Club in England and the United States.  For many years they refused to relinquish control of the stud book to the American Kennel Club (AKC). However, in 1995, the breed was included.