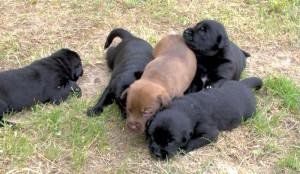 Cesarean Section is a surgical incision made through the abdomen and into the uterus to deliver a puppy or kitten when a natural birth would bring harm to the mother. It is performed under general anesthesia, and it is more commonly necessary on small breed dogs whose pelvic canals are not large enough to deliver a puppy. Generally, animals with larger litters of puppies or kittens are less likely to require a C-Section, because the babies will be smaller in size. Certain breeds of dogs, like brachycephalics – dogs with pushed in faces and dome-like heads, will often require a C-Section. Emergency Cesareans are performed when something goes wrong in natural delivery, such as cessation of contractions, or a fetus lodged in the birth canal.

Normal gestation periods for dogs and cats are 63 to 65 days. If the date of conception is known, an abdominal x-ray one week before whelping (giving birth) should be performed to predict the need for a C-Section. An x-ray will reveal the size of the litter and the size of the babies’ heads.

If a Cesarean Section is planned or becomes necessary, a general anesthetic will be administered. A complete blood count, chemistry panel, and electrolyte panel will be run before anesthesia to discover any underlying illness that may complicate recovery. An intravenous catheter is placed and supportive fluids are given to help prevent dangerous dips in blood pressure that can lead to post-operative organ failure. Blood pressure, EKG, and blood oxygen saturation (pulse oximetry) are monitored carefully during the entire procedure.

Inhalant gas anesthesia is used during c-sections because they are minimally metabolized in the blood stream, and they are quickly “blown off”. Anesthetics can cross the placental barrier, so the unborn babies are susceptible to depressed heart and respiratory rates. After delivery, the newborns will sometimes require stimulants to get them breathing and thriving.

The litter is delivered with the placental sacs and amniotic fluid intact. The surgeon and nursing staff will quickly remove the sac and aspirate the fluid from the babies’ mouths. As soon as the mother recovers from surgery, the litter will begin to nurse. Oral glucose may be given to the newborns in the case that they can not begin nursing immediately.

The incision made in the abdomen to perform a Cesarean Section will be considerably larger than that of a routine spay. Healing time may be delayed because of the stress of pregnancy and nursing. It is also possible to spay the female dog after performing a C-Section, but it is important that she can begin nursing the litter as soon as possible.