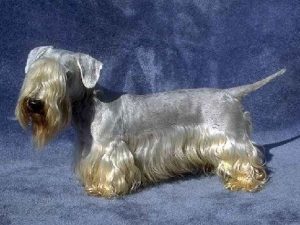 This breed was developed by the Czechoslovakian geneticist, Frantisek Horak after World War II.  A devoted hunter, he began by crossing Scottish Terriers with Sealyham Terriers in order to produce a hunting terrier that was lighter in build than the original breeds and that had the same enthusiasm to go-to-ground.  The breed was officially recognized by the Czech Kennel Club in 1963.  Though the breed was met with interest abroad, exporting a dog from behind the Iron Curtain was so difficult in the 1970′s that the breed remained largely in its native land.  It is now popular in many of the Fédération Cynologique Internationale (FCI) countries and is making in-roads in the United States, where it is shown in the American Rare Breed Association shows.