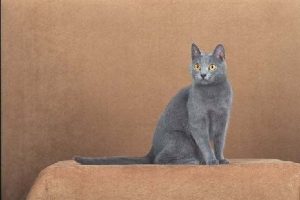 Legend states that this cat rounded Cape Horn with Crusaders returning to France.  The cats took residence in the monastery of the Carthusian monks during the 17th century.  The breed almost became extinct during World War II but was saved by the preservation of four Chartreux families on an island off the coast of France.  Accepted for championship in the Cat Fanciers’ Association (CFA) in 1987.