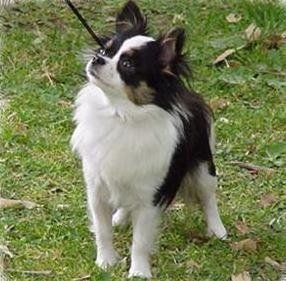 The origins of the Chihuahua are not known.  The modern dog was, however, discovered in Mexico’s Chihuahua state in 1850.  Most of today’s dogs are descended from the original 50 taken to the United States.  Evidence in stone carvings of the Toltec people firmly establishes the Chihuahua was in Mexico in the ninth or tenth century.  Written records also indicate the dog was important in the religious and mythological life of the later Aztecs.  Chihuahuas may be longhaired or smooth-coated.  The smooth coat is considered to be the original variety.  The longhaired dogs were created in the early 20th century possibly by crossing with longhaired toy breeds such as the Papillon and Pomeranian.