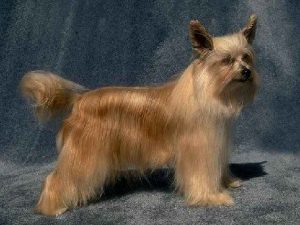 It is widely accepted that hairless dogs are spontaneous, genetic mutations.  They have been reported all over the world but for some reason they are more often found in Central and South America.  The Crested dogs are recorded in China 2,000 years ago but it was in Central America that they were fostered, keeping the breed alive when it fell out of favor in its native land.  The Chinese Crested is found in two varieties—Hairless and Powderpuff—and both types can be found in the same litter.  The main difference between the two varieties is the hair coat, of course, but the Powderpuffs can also have a drop ear, which is not permitted in the Hairless variety.  The Powderpuffs are not subject to as many genetic defects as their Hairless siblings and need to be retained in the breeding pool to maintain the health of the Hairless Cresteds.  A breed club was formed in 1975, and the Chinese Cresteds were accepted for registration in the American Kennel Club (AKC) in 1992.