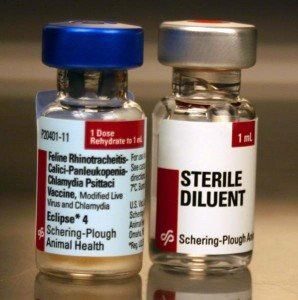 Feline Chlamydiosis causes upper respiratory and eye infections in cats. It is a bacterial infection caused by the organism Chlamydophila felis (previously Chlamydia psittaci). The symptoms are generally mild but can progress if left untreated. The most common symptom of Chlamydia however, is conjunctivitis – a purulent (pus) discharge and inflamed tissues surrounding the eye. Congestion and nasal discharge are also symptoms seen with this infection. A vaccine is available for cats at high-risk for Chlamydia, but it is generally not part of a core vaccination protocol because of its limited efficacy and relatively high incidence of side effects (3%). Cats that should receive the vaccine are those in cat shelters, where infection can become endemic.

Overcrowded, poorly ventilated, and unsanitary conditions are breeding grounds for Chlamydia. The bacteria are easily carried from one cat to another on human hands and clothing, contaminated bedding and food bowls, and un-disinfected cages. Cats with respiratory symptoms can propel bacteria into the air when they sneeze and cough. Stress and malnutrition also make cats more susceptible to the infection. Young kittens and those with immunodeficiency virus (FIV) are most vulnerable.

Mild chlamydiosis usually responds well to antibiotic therapy. Cats should be treated aggressively at the first signs of infection before the progression of more severe respiratory symptoms occurs. Cats rely on their sense of smell for their appetite; therefore, they will stop eating when nasal congestion occurs. This makes them even more susceptible to infection.

The bacteria can be cultured from ocular and nasal discharge; however, most of the time the diagnosis is made based on symptoms and history. Also, there are blood tests to check for antibodies produced in response to Chlamydial infections. Further diagnostics may be done on cats that do not respond well to treatment. Chlamydia shares common symptoms of several other upper respiratory diseases.