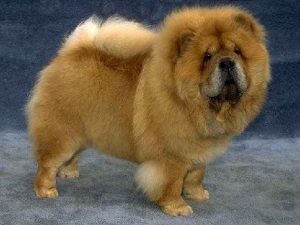 One of the oldest recognizable breeds of dogs.  The Chow Chow is readily identifiable in northeast Asian artifacts that date before Christ.  The original purpose of this large member of the Spitz family was as a hunting dog.  A seventh century emperor of China is said to have kept over 4.000 Chows in his sporting kennel.  The breed gradually became more commonly used as a guard dog in temples.  It was attributed with mystical, supernatural powers and its terrifying warrior scowl was thought to scare off evil spirits.  No doubt the scowl and the Chow’s willingness to back it up with action worked quite well on humans with evil intentions, too.  The first Chows left the Orient in the 1880′s bound for England.  From there, they made it across the Atlantic in less than 10 years.  This breed is firmly in the top twenty most popular breeds in the American Kennel Club (AKC).