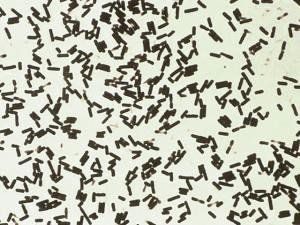 There are at least 100 species of the bacterial genus Clostridia that exist in nature, a variety of which are employed commercially in the production of useful compounds like ethanol and acetone. Four species are considered pathogens however, or disease-causing organisms responsible for illness in people and animals. Botulism is a life-threatening paralytic disease that leads to respiratory failure after intoxication by spoiled foods or wounds infected by C. botulinum. Tetanus is also a paralytic disease colloquially named “lock-jaw”, caused by C. tetani. C. difficile is responsible for colitis in people, and C. perfringens is the organism that causes gas gangrene, or “black-leg”. In dogs and cats, Clostridium perfringens is implicated in mild to severe forms of diarrhea. While it is always treated as a causative agent when identified in symptomatic pets, many animals may carry the organism without becoming ill. Clostridium therefore, may be thought of as an opportunistic pathogen in pets, which may become a cause of disease when some other insult has occurred in the digestive tract.

All Clostridia species have several characteristics in common: they are capable of producing toxic substances; they are anaerobic bacteria, meaning they grow in the absence of oxygen; and, they produce endospores which are protective barriers to the stresses of the harsh environments in which they thrive. These attributes make Clostridium an ideal opportunist, as it can be found in many sources of infection, cause significant disease, and may survive antibiotic therapy and exposure to disinfecting chemicals.

C. perfringens can be cultured from the feces of approximately 80% of dogs, healthy or not. Therein lies the problem in diagnosing the organism as the primary cause of diarrhea. As a resistant spore, Clostridium may exist as part of the “normal” bacterial flora in the digestive tract. It is when an overgrowth of this pathogen occurs that the enterotoxins produced by Clostridium cause fluid leakage from the intestinal wall, and thus diarrhea ensues. In some cases, whether because the animal is particularly susceptible or the strain of Clostridium is especially virulent, the diarrhea can become a life-threatening hemorrhagic colitis (bloody, mucousy diarrhea associated with massive protein and fluid losses).

To determine whether Clostridium is responsible for the presenting illness, it must first be identified in the feces of the sick pet. Fortunately, when large numbers of C. perfringens are present, they are easily identified as dark-staining spore-containing bacterial rods under the microscope. In the absence of any other primary cause for diarrhea, such as parasites, intestinal foreign bodies, or metabolic disorders, the presence of Clostridium gives a presumptive diagnosis. Since diarrhea is so common a symptom in many disease processes, a thorough assessment must be performed to rule out other causes. The veterinarian will want to verify that blood work is negative for abnormalities not associated directly with Clostridium infection. Being an opportunistic pathogen, C. perfringens overgrowth may be secondary to an underlying disorder. Furthermore, an animal does not need to be treated for Clostridium unless symptoms are present; microscopic identification of the organism in the healthy patient is not necessarily a justification for treatment.

A better test to determine whether Clostridium is a cause of diarrhea, rather than an incidental finding, is a fecal enterotoxin level. This test measures the amount of toxin found in the feces and must be performed at a reference laboratory. Better still, a DNA test can be used to identify the specific strain of Clostridium perfringens known to be responsible for disease.

In most cases, microscopic identification of the organism in a symptomatic pet will support beginning antibiotic therapy. A history of dietary indiscretion is a common trigger to Clostridial overgrowth. Antibiotics used in C. perfringens infections include a combination of metronidazole and amoxicillin, erythromycin, and tylosin. Response to treatment occurs rapidly as the enterotoxin levels subside, and the bacterial overgrowth is abated. Treatment is usually continued for two to three weeks to avoid antibiotic resistance and relapse of the symptoms.