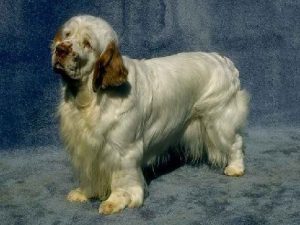 The Clumber Spaniel is named after a place, Clumber Park, which was the estate of the Duke of Newcastle.  The foundation stock, it is said, was given to one of the English dukes in the mid-18th century by a French duke.  The heavyset retriever became the favorite of several British kings who tended to be heavyset themselves.  They couldn’t keep up with faster Cocker, Springer, and Field Spaniels,  but the steady plodding Clumber suited them fine.  Recognized in England in 1859, the Clumber was registered in the United States in 1883.  It has never been the spaniel of choice for American hunters who favor a bustling, faster-moving bird finder.