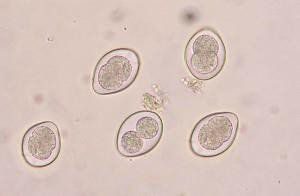 Coccidia are protozoan parasites that infect the small intestine of dogs and cats. In large numbers, a condition called coccidiosis can cause diarrhea, vomiting, anorexia, lethargy, and death. Usually an illness of puppies and kittens, adult animals develop a natural resistance to coccidia and can be silent carriers of the organism.

Coccidia require a fecal to oral transmission. Puppies and kittens are very likely to ingest fecal matter, and subsequently become infected by the cysts that are shed by an infected animal. About two weeks after exposure to coccidia, the susceptible juveniles will begin to exhibit symptoms. Diarrhea may be bloody and mucoid, and in advanced cases, vomiting and dehydration can lead to death.

Treatment for coccidia does not actually kill the parasites. Instead, Sulfonamide drugs inhibit the reproduction of the organisms, allowing the immune system to clear the infection over time. Treatment will usually last at least two weeks, and may be extended in resistant cases. Very low numbers of cysts that go undetected may remain in the animal, and relapse can occur during times of stress or immune suppression. The two most common drugs used for treating coccidiosis are Sulfamethoxine (Albon) and Trimethoprim-Sulfadiazine (Tribrissen). Side effects from these drugs are rare and associated with long-term dosing, but they can include dry-eye (KCS) which is a serious condition. So, tell your veterinarian is you notice any discharge, redness, or squinting of the eyes.

Adult animals may carry low numbers of coccidia without becoming sick. They should probably be treated until none of the parasites are found on a fecal flotation, as they can continue to be reservoirs of infection for younger animals.

Stools from an infected pet should be removed from the environment to prevent re-infection. Although human coccidiosis is not thought to originate from dogs and cats, people with compromised immune systems should avoid contact with infected animals.