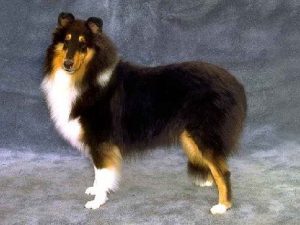 An ancient breed of herding dog, the Rough Collie shares a common heritage with the Border Collie.  In the 1860′s, the Rough Collie caught the eye of people interested in the beauty of the dog and bred it to increase body size and the thickness of its coat.  The bigger, slower Rough Collie was able to compete for the shepherd’s favor with the increased popularity of the larger, slower English sheep (more wool), and it began to find its way back into the fields.  With the patronage of Queen Victoria, the Collie became the vogue in the 1880′s.   American royalty, in the form of J. P. Morgan, championed the breed across the Atlantic as well.  In 1885, Collies were admitted into the American Kennel Club (AKC) and great specimens were fetching more than the average man earned in 10 years.  There are two varieties of the Collie.  Everything that can be said about the rough-coated Collie can be said about the smooth variety except for coat.