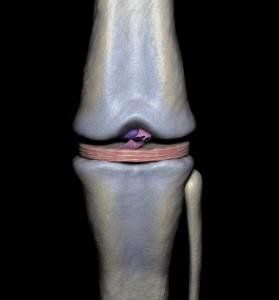 Cruciate ligament rupture is an injury to a supportive ligament in the stifle (knee). Sometimes called an ACL, or anterior cruciate ligament, it is also referred to as a CCL, or cranial cruciate ligament. The rupture can be caused by an acute injury or a chronic degenerative condition. In either case, surgery is the treatment of choice to heal the stifle and prevent arthritic deterioration of the joint.

The cruciate ligament is so named because it crosses the joint. It originates at the back of the femur and attaches to the front of the tibia. In this way, it prevents forward movement of the lower limb independent of the upper limb. The veterinarian can often diagnose a complete cruciate rupture by palpating a “cranial drawer sign” in the stifle. A partial rupture is more often diagnosed by assessing symptoms and, over time, a buttressing or thickening of the bone and joint capsule surrounding the stifle. An MRI or surgical exploration of the joint is the only way to confirm a partial cruciate rupture.

There are two widely used surgical techniques that can be performed to repair the stifle after a cruciate ligament tear. The first method is called an extra-capsular repair. This surgery involves opening of the joint capsule to remove the torn ligament as well as the meniscus (cartilage pad between the bones) if it is damaged. The joint capsule is then sutured closed. Nylon monofilament sutures are then looped behind the fabella bones adjacent to the femur, passed through a hole drilled in the tibial crest, and secured to the tag end using crimp sleeves or surgeon’s knots. This suture mimics the cruciate ligament in its function. Recovery typically requires 10 to 12 weeks of leash only activity and physical therapy such as range of motion exercises. Rarely, the sutures have to be removed months later if they break, however scar tissue that has formed around the bands continue to support the stifle.

The second surgical technique is called a TPLO, or tibial plateau leveling osteotomy. In this method, the joint capsule is opened and the ligament / meniscus are removed just as in the first surgery described. Then an osteotomy (cutting of the bone) of the tibia and rotation of the bone, followed by stabilization using a specially designed plate, is done. This changes the angle of the tibial slope, which alters the mechanics of the stifle to achieve stabilization. Strict exercise restriction is required until radiographs taken 6-8 weeks postoperatively demonstrate adequate healing. Healing in young dogs may occur within 4 weeks whereas in older dogs healing of the osteotomy site may not occur until 12 weeks postoperatively. Restricted activity and physical therapy will be prescribed for approximately 16 weeks. This surgery is almost always performed by a specialist in orthopedics.

Pain medications are used peri-operatively and are sent home after surgery. GAG supplements (chondroitin) and Omega 3 fatty acid supplements are used on a long term basis to support joint health for the life of the pet.