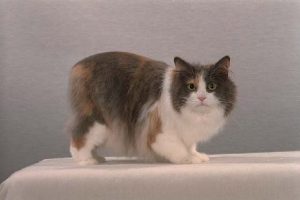 The Cymric (kim-rick) is a longhaired mutation resulting from purebred Manx parents.  Although longhaired Manx have always appeared in Manx litters, it was only recently that breeders have attempted to have them recognized as a separate breed or breed division.  The International Cat Association (TICA) considers Cymrics as a separate breed from Manx.  In the Cat Fanciers’ Association (CFA), Cymrics are referred to as Longhaired Manx, a division of the Manx.  Recognized for championship status in all breed associations.