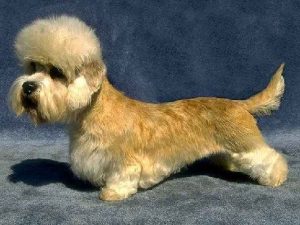 Originally bred to hunt small game, the Dandie Dinmont Terrier is as hard-bitten as the varmints that share its homeland in the border area between England and Scotland.  This farmer’s dog became the darling of country squires in 1814 when it was mentioned in Sir Walter Scott’s novel, Guy Mannering.  Popularity was immediate, and the little varmint dogs became the darling of urban society as well.  They were one of the first breeds accepted in the American Kennel Club (AKC).