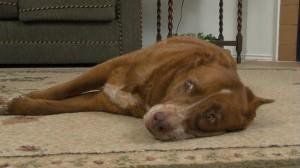 Diabetes Mellitus is a fairly common illness found in dogs and cats. Just like in humans, this disease is devastating to the body when left undiagnosed and untreated. Symptoms are often subtle in the early stages of diabetes, advancing to widespread deterioration in the health of the patient as the disease progresses unchecked.

In diabetic animals, the blood-sugar level – or blood-glucose – is elevated above the normal range. Elevated blood-glucose is called hyperglycemia.

Glucose is the energy source for all cells in the body. All ingested food is eventually broken down into this basic unit of energy. The heart, brain, and all other organs and tissues in the body require glucose to function and survive. It is delivered to the cells by a circulating hormone called insulin. Diabetics may have either or both, a deficiency in the production of insulin – Type I Diabetes, or a resistance to the mechanism of insulin – Type II Diabetes. Type I Diabetes is most common in dogs, and Type II is most common in cats. In either case, glucose is not delivered effectively to the cells, and instead remains in high concentrations in the bloodstream.

The symptoms of diabetes, however subtle or apparent, are caused by both the reduction in the delivery of glucose to the cells and the elevated blood levels of glucose that is unused. Diabetes tends to afflict adult dogs and cats, and since they can not communicate how they are feeling, lethargy is often mistaken for maturity. It would be obvious that something was wrong if a rambunctious puppy or kitten suddenly became lethargic, but a mellow adult dog or cat may seem normal when it is actually energy-deprived. Therefore, lethargy is often overlooked as a first symptom of diabetes.

More noticeably, the cells being starved for glucose causes the animal to feel a constant sensation of hunger. The term used for increased hunger is polyphagia. Despite an increase in food intake, diabetics will begin to lose weight. This is because they are not able to utilize the glucose that is derived from food. Instead, the body begins to burn fat stores in order to survive. Because obesity is a contributing factor in the onset of diabetes, many diabetics will present as overweight patients that exhibit unexplained and sudden weight loss.

The elevated levels of unused glucose in the bloodstream, on the other hand, cause more significant symptoms. Glucose must be dissolved in water in order to be carried within the blood vessels, and the increase in blood-glucose tells the body to retain more water in order to compensate. Increased thirst, and subsequently, increased urination are profound symptoms of diabetes. Increased thirst and urination are referred to as polydipsia and polyuria respectively. Furthermore, when blood-sugar levels reach a threshold, glucose will begin to “spill over” into the urine, becoming food for bacteria. Ascending urinary tract infections are very common in diabetic animals, causing urinary accidents to be a very common symptom. Many diabetic patients are first diagnosed when presented at the veterinary hospital with the complaint of inappropriate urination.

In diabetic dogs, cataract formation occurs in almost all cases, even after treatment is pursued. This does not occur in cats. Cataracts are an opaque plaque that forms on the lens of the eye, impairing vision. Cataract formation in a relatively young dog makes them a suspect for Diabetes Mellitus.

To summarize, symptoms of diabetes may be vague and subtle at first, progressing to an obviously unhealthy appearance of the pet. Lethargy, increased water consumption and urination, weight loss despite an increased appetite, and early cataract formation in dogs are all symptoms that describe a diabetic pet.

Some of the terms that veterinarians use to describe a diabetic pet are: